Grey metal project in the countryside of northern Eastern Shore illustrates the possibilities using the preservation system of restoring an old standing seam metal roof. The owners saved thousands of dollars using this approach instead of replacing the roof with something modern.

There were three areas of concern: the standing seam panels, leaks in the gutter area and problems around the large chimneys. As we talked, the tint of the roof ceased to be a major issue since the roof is practically invisible, unlike most metal roofs. The choice of a light grey seemed appropriate.

The crew applied a strong primer, called Polaprime 21 from Andek Corporation, to the standing seam panels and inside gutter areas. Inside the gutters, a mesh application was installed to prevent the leaks. Around the chimneys, the crew applied a combination of coating and mesh.
The grey top coats of Polaroof AC from Andek Corporation finished the work. 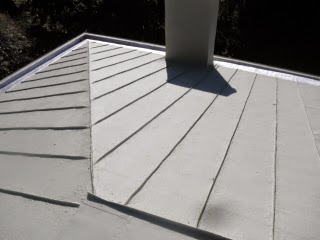