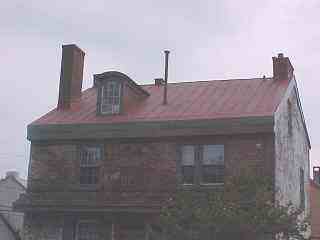 A ghost of a Hessian soldier appears to be responsible for sabotaging our roofing work at the “Uniquely Native” Craft Shop in Mount Holly, NJ, during the summer of 2006. Little did I realize that this shop is a well-known haunted place.

The owner of this real haunted place is Mary Carty, a descendent of the Piney-Lenape tribal group. She has bought her artistic skills to her craft shop, creating an innovative store to browse. Our job was to paint her roof in barn red and stop the leaking on the side of the building.

As we talked about the details of starting the project, she commented on the ghost of the Hessian soldier who reportedly lived in the basement. Whenever she descended the steps into her basement, she felt his chill, a presence of a nasty spirit, she told me.

Regardless of any existance of a ghost, I predicted an easy project. Woe was I! A ghostly Hessian soldier with a mean attitude can make mischief. (If you suspect that I am disguising a dull lesson into a ghost story, you are right. Just keep in mind, all the facts are true–ask Mary). 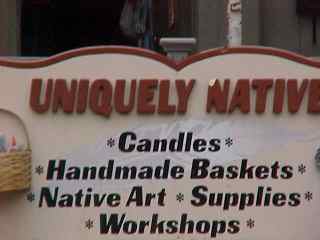 Over the phone, Mary informed me, “One of your guys dropped a pail of acrylic and ruined my new sign and steps.”

When I arrived on site, the “guy” was Lester, the crew chief. He is a 20-year-plus veteran that never drops a bucket of anything. As I found out, he had NOT dropped a pail, exactly.

In Lester’s long experience, he knew that certain bucket handle designs are less than secure. With these undesirable bucket designs, the aluminum handle slips out of the pail slot; the bucket falls away leaving the empty handle in the worker’s grasp.

Sure enough, the acrylic pails for this job had these less secure handles. As a result, Lester took his usual steps to circumvent the problem, but on this day…..
A Twist in the Tale 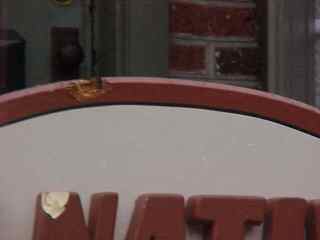 When I talked with the acrylic manufacturer, a wrinkle occurred in the blame game.

Apparently when the manufacturer ordered a certain quantity level of plastic pails from its outside source, an office-type individual at the pail supplier company programmed the shipment of the less desirable handled buckets because of the way the buckets are packaged for shipment.

So the fault began with the packaging practice of the pail manufacturer.

What started out as carelessness of a crew member changed to an off-site pencil pusher’s fault, a step or two step removed from the acrylic manufacturer and crew chief. At this point, I began to suspect the sneaky influence of that Hessein ghost from this real haunted place. This Mount Holly ghost displayed a mischevious spirit.

In my career, customers teach me basic truisms, even in a real haunted place like the Budd House. The lessons learned and translated into this ghost story are..