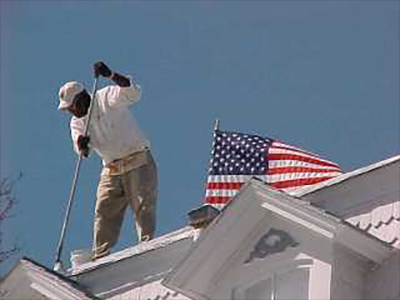 Over several decades, our work has evolved as liquid roofing products improved. At present, we are known for applying coating-style systems to the niche called old metal roofing.

Both owner and crew chief began working on commercial roofing projects using the white acrylics as an integral part of the system to create cool roofs. Commercial building owners quickly understood the economic value of a white roof over black surfaces.

After the turn of the century, urban centers with rowhouses began to appreciate the favorable impact of white roofing on “heat island” temperatures. For example, in 2003 in Baltimore, MD, Roof Menders applied the first cool roofs to rowhouses. Just a decade later, as Baltimore searches for methods to achieve success with carbon imprint requirements, white roofs are automatically included in any plans.

When This Old House introduced the concept of applying acrylics as a method to preserve old metal roofing, Lester’s artistic talent discovered an outlet for his abilities. And this owner happily combined roofing work with her interest in history. Since 2000, vintage metal restoration work has become our signature in six states.