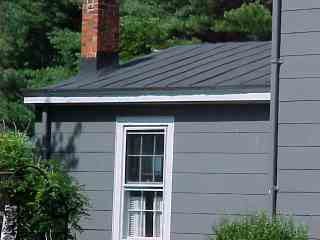 Both standing seam metal roofs and embossed tin shingles can be found in all parts of the Commonwealth. For example, in Burkeville south and west of Richmond along the railroad line, a large residence with a black metal roof stands out in the neighborhood. The roof was in excellent condition for its age, with the inside gutters still in good working order. With some work, we were able to improve the gutters appearance as viewed from the windows. (In Virginia, I avoid using the “Yankee gutter” label.)

In Appomattox, where the Civil War ended, few metal roofs remain. Probably there was an ambitious asphalt shingle contractor in this community. One of the two metal shingle homes is owned by two history experts on the French and Indian Wars. They, like so many tin roof owners, wanted to preserve our heritage. Their reasonably sound roof exhibited some overhang problems. We worked with them on a solution that appeared to resolve their concerns.